This blog was started in February 2007 for documenting the shaping of my freestyle kayak (most of it is in french, except a summary in german). Pani Piyo! is the name of the kayak and means drink water! in Hindi, one of the main languages in northern India .

But the blog is not only about kayak, and you can browse through the categories: "Overland to India 2007-2008", "Pani piyo 2008" for informations on building a kayak with vacuum bagging (in French or German), "Building a paddle", "Wood - Carpentry", or "Miscellaneous".

You'll find texts in English, French and German. I'm sorry for this melting pot, but it is quite tricky for me as a french living in Austria to find the right language...

What do Tarzan, the rainforest and meat consumption have in common?

The answer to this question appeared to me like a flash after a long night working in the Konzerthaus (I do the wardrobe there and this time I had to work until 3:30am). The event this night was an award ceremony for promotion and advertisment design and I got in my hands a magazin (Lürzer's Achiv, nr. 1/09) which presented a collection of great ads. Among them, I specially laughed when I saw this one from a WWF campaign: 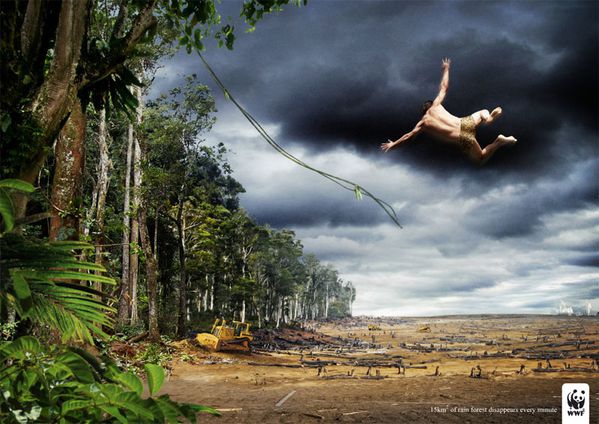 Of course, I went sleeping after that good laugh (it was 4:00 am) but next morning while riding my bicycle I saw the following sign in a street of Vienna (Goldschlagstraße) and laughed again: Everything must have a meaning, so I thought I had to write this article. Meat consumption needs a lot of land for producing cattle feed, and latin american countries cut the rainforest not only for wood, but also for growing soya or corn in order to support increasing meat production all over the world: watch the movie "We feed the world" from Erwin Wagenhofer for more information on this topic.

A big part of the soya grown in these regions after forest clearing is the famous Monsanto Roundup ready soya. Very few is known yet about potential effects of GM food on human/animal health and on the environment: watch the movie "Controlling our food" from Marie-Monique Robin (In french: "le monde selon Monsanto", in german "Monsanto: mit Gift und Genen").

Apart from this, clearing the rainforest destroys habitats for wildlife and biodiversity. Furthermore, the carbon stocked in the biomass and in the soil of these environments is also subject of concern in the context of climate change and rising atmospheric CO2 concentrations (see Janzen, H. (2004). Carbon cycling in earth systems - A soil science perspective. Agriculture, Ecosystems and Environment, 104, 399-417)

There are many reasons to be vegetarian. So, if you don't want to do it for the animals, you could still think of it as a solution for saving the planet... And even if you don't want to become a vegetarian, you can at least reduce your meat consumption or have for example one meat free day per week at the beginning!

The food production system is made in such a way, that you don't have to think when buying meat and you eventually forget where it comes from. Watch the short movies from the Meatrix. They provide a great argumentation on this subject, and most of all: they are funny!

I'm sorry for the next picture, but the 22 of March 2009 was the international day without meat and some spanish activists decided to go on the street... "Meat is murder", was their slogan (I put it all down in case you don't want to have to see it). This kind of picture is shocking but it is at least a possible way to raise awareness and show what meat really is, although it may not be the right method to convince everybody.